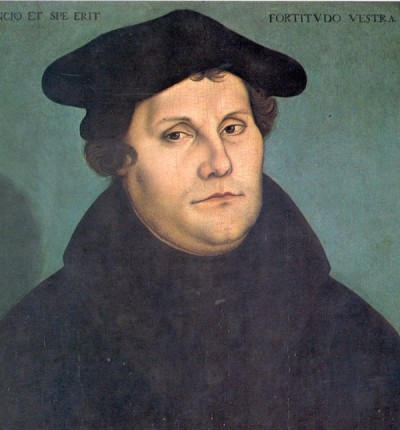 Martin Luther, the Great Reformer, lived from 1483 to 1546. He grew up in the German city of Eisleben about 120 miles outside of Berlin. He studied law at an early age and achieved a bachelor’s and master’s degree by the age of thirteen.

At the age of twenty-one, he was nearly struck by lightening while traveling through the countryside during a thunderstorm. Scared out of his wits, he interpreted this as God’s way of getting his attention and cried out to God that evening, “I will become a monk!”

During his years a Catholic monk, Luther lived in great fear and anxiety because of poor theological instruction. He labored intensely to earn his righteousness through a life of piety and self-denial. During this time, Luther began to pursue a doctorate degree in the Bible. In his studies he encountered the true Gospel as he read the book of Romans and the Psalms. He said of this time, “At last meditating day and night, by the mercy of God, I…began to understand that the righteousness of God is that through which the righteous live by a gift of God, namely by faith…Here I felt as if I were entirely born again and had entered paradise itself through the gates that had been flung open.” Thus began Luther’s salvation and discovery of the great biblical doctrine of justification by faith alone through grace alone in Christ alone that would become the cornerstone of the Protestant Reformation.

On October 31, 1517, Luther could contain his discovery no longer. He was incensed at the manner in which the Catholic Church was raising funds for the building of the Basilica in Rome through the selling of indulgences. Indulgences were notes sold by the Church to living people as a way of purchasing for themselves or their dead relatives relief from the unbiblical notion of purgatory. Of course, after discovery in Romans the free gift of salvation through faith alone, Luther had to oppose this practice. So, on All Saints Day, he posted ninety-five complaints against the Church on the door of the chapel in Wittenberg, Germany. This historic document, called Luther’s 95 theses, marked the beginning of the Protestant Reformation.

In 1521, Luther was called to stand trial before the Roman Emperor, Charles V, at a meeting called the Diet of Worms, in the city of Worms, Germany. At this trial, he was pressured to recant his writings and 95 theses. In the face of great pressure and the threat of his life, Luther uttered his famous “Here I Stand” speech in which he said, “Unless I can be instructed and convinced with evidence from the Holy Scriptures or with open, clear, and distinct grounds of reasoning…then I cannot and will not recant, because it is neither safe nor wise to act against conscience. Here I stand. I can do no other. God help me! Amen.”

Luther was subsequently declared a heretic by the Church, and forced into hiding for essentially the rest of his life. During this time, Luther continued his theological work, translating the Bible into German so that every day people could read it. He also wrote many other books and works which still stand today as mountains in church and theological history. He died in 1546 at the age of sixty-three.

Luther’s contribution to the body of Christ and the entire world cannot be overstated. He stands as one of if not the most important men in history since the Apostles.

Click here for a link to an excellent biography on Luther, Here I Stand by Roland Bainton.