“My kingdom is not of this world.” 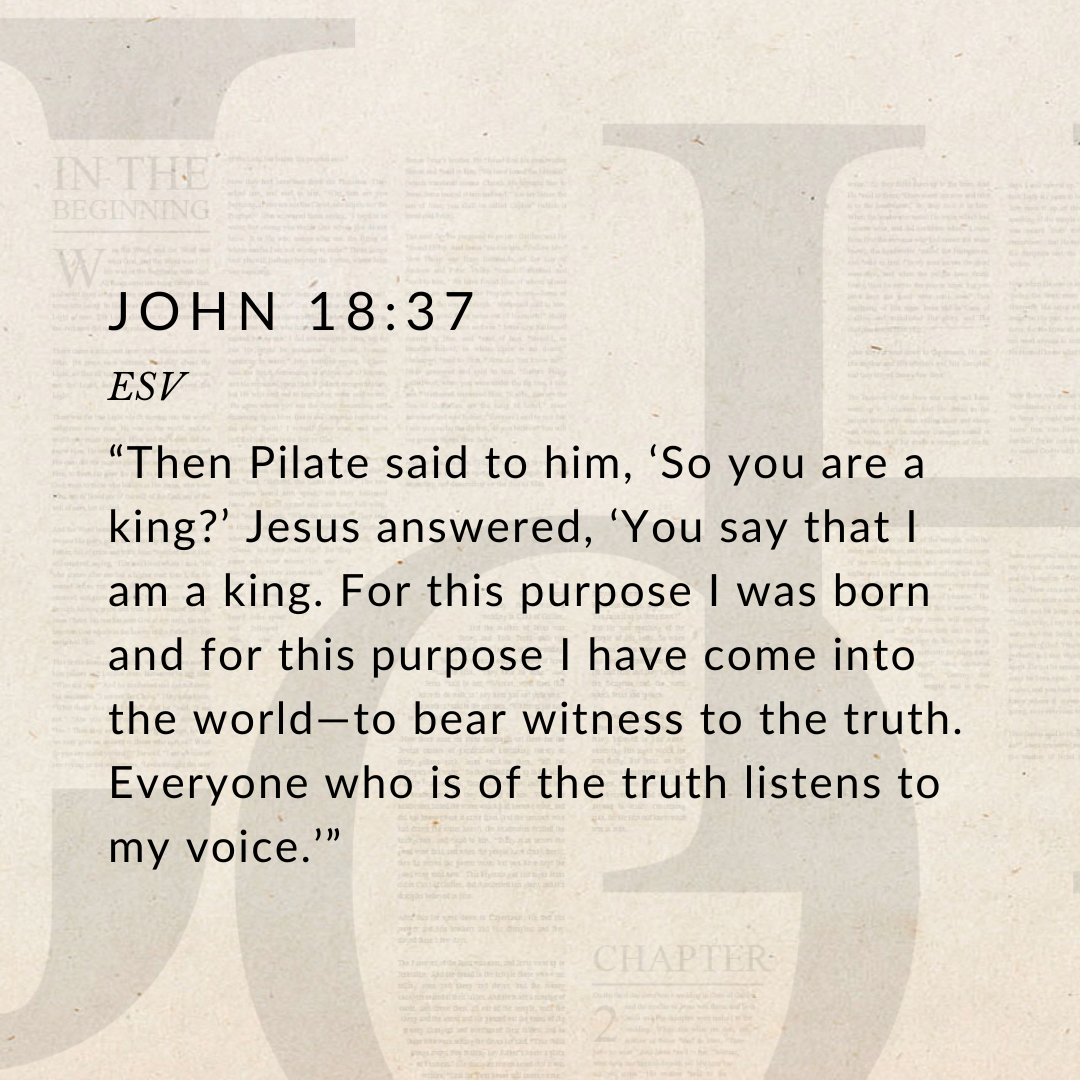 Last week Tyler did a great job explaining the context of Jesus’ “trial” by the Jewish leaders. Be sure to listen to it if you haven’t already. Sometimes biblical narratives can be so familiar to us that we fail to notice certain details that give us a better sense of the emotional meaning of a passage—how a story should make us feel. In particular, when Jesus faces questioning and Peter deals with questions of his own, we should be mindful of the haste with which this whole scene takes place. The story doesn’t stop when the rooster crows but continues as Jesus is then brought before a man named Pilate, the regional governor put in place by Rome.

Because the Jews can’t legally execute anyone, they need the approval of Pilate. In fact, they almost need this to feel like Pilate’s own idea, but there’s a problem: Pilate does not care about Jewish theological squabbles. The Jews interrogated Jesus concerning his disciples and teaching, but it becomes clear that these things don't factor into their explanation of Jesus’ charges before Pilate. Instead, he is urged to ask Jesus about something different: “Are you the King of the Jews?” (18:33). While Roman authorities might be “above” theological debates, if Jesus is claiming some sort of kingly authority there could be problems with Caesar.

And so, the heart of this portion of Jesus’ evaluation by Jews and now Gentiles considers what it means for Jesus to be “King of the Jews.” Turns out, Pilate’s problem is not that Jesus might usurp Caesar’s power through violent uprising or means of coercion but that Jesus’ kingdom spreads through belief in the truth of who he is and what he has come to do. Pilate’s dismissive short-sightedness sets the stage that ultimately leads to Jesus’ crucifixion.

So, prepare for Sunday by reading our text, John 18:28–40, a few times. To conclude our time together this Sunday, we’ll also have the joy of seeing a brother baptized. I hope to see you all there!

Turn to the Lord

“Far as the Curse Is Found”

“My kingdom is not of this world.”

The Death of Lazarus

The Light of the World

“The God of All Comfort”

“For She Loved Much”

“The Freedom of Being Dispensable”

A Survey + Preparing for Sunday

“The Authority of Jesus”

“Paul Preaches at the Areopagus”

“There arose another generation...”

This Sunday: “Our Triumphal Procession in Christ”

Getting ready for Sunday + a few announcements

This Sunday: “Your Throne Shall Be Established Forever”

This Sunday: Jesus Our Priest

This Sunday: “To Him You Shall Listen”

This Sunday: “David and the Ark”

This Sunday: “The Knowledge of Our Lord”

This Sunday: “The Zeal of Phinehas”

Of Figs and Faith

The Mountain of Transfiguration

$15 OFF Base Camp Today Only

Sunday: How Lovely Is Your Dwelling Place